Kendall Coyne Schofield remembers all the indignities early in her hockey journey. 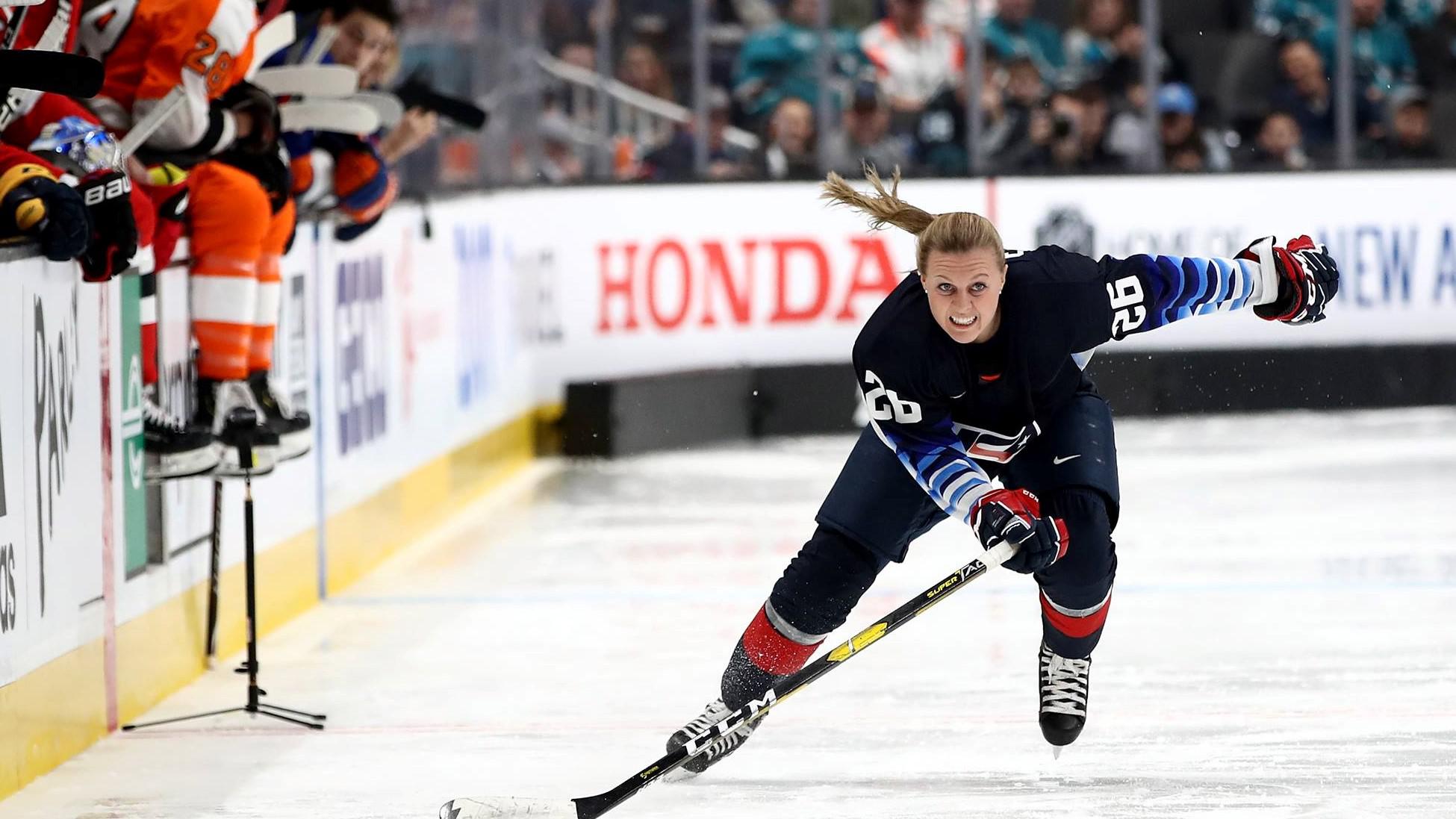 Kendall Coyne Schofield remembers all the indignities early in her hockey journey.

The snide comments from opponents for her blond ponytail spilling out of the back of her helmet. The omitted invites to hang out with her young teammates, the rest of whom were boys. And the false presumptions by coaches who cut her from those teams that she — always being the only girl — would cause problems.

But what did all of them want her to do?

The starting point of passion was all too familiar: An introduction to the game by way of an older brother; skating for the first time at 3, and joining a house league team at 5 and longing to play travel hockey.

But there were important distinctions in Kendall’s story, like her parents initially putting her in figure skates and her being the only little girl in her area to play hockey, a point others — including adults — often highlighted.

Kendall didn’t set out to be a pioneer. But she’s grown comfortable becoming an advocate that #HockeyIsForHer. In January, the Chicago Blackhawks released an inspiring documentary titled, “As Fast As Her,” that chronicles her remarkable story and taps the insights of sporting legends from Billie Jean King to Patrick Kane and her childhood hero (stay tuned). She hosts an annual hockey camp for girls age six and up, and she serves as a color commentator for the San Jose Sharks. Arguably the fastest female skater in the world, Kendall also stepped in as a replacement in the 2019 NHL All-Star Skills fastest-skater challenge.

“She had one opportunity,” King says in the documentary. “She could either blow it or make it, and she made it.”

When it comes to Kendall, though, that’s nothing new. 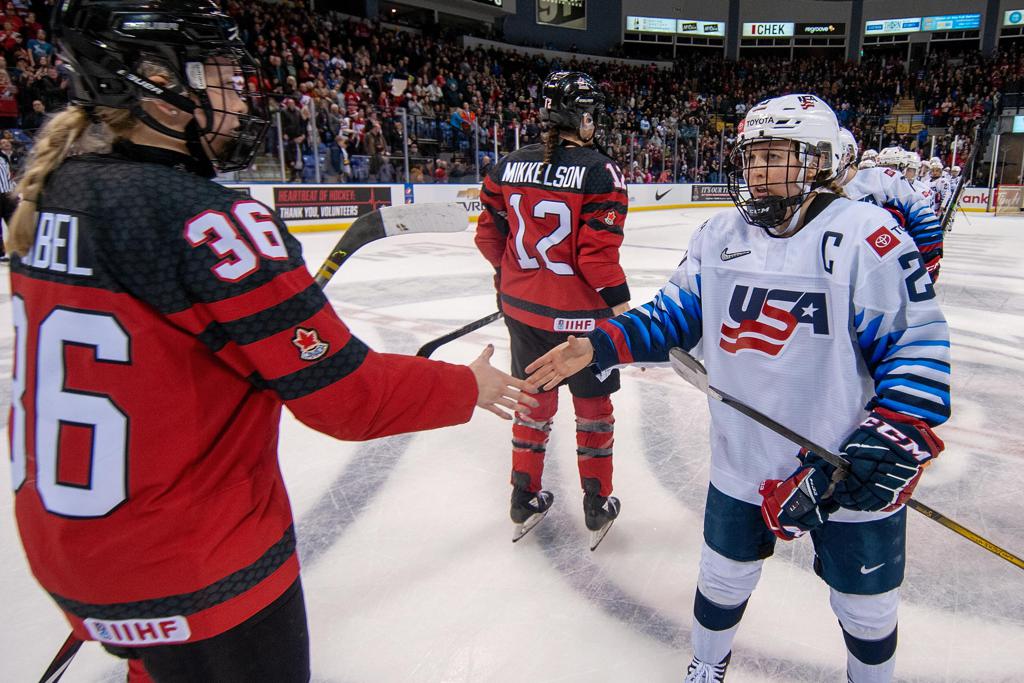 Kevin Coyne showed an interest in hockey, so his parents signed him up. Being around the rink, little sister Kendall, who was three years younger, naturally tagged along on trips to the rink.

“I want to do that,” Kendall, who was born in Palos Park, Illinois, recalls telling her parents.

They put her on ice. But Kendall quickly realized that her skates were different than Kevin’s. He had hockey skates, she had figure skates.

Nothing against figure skating,” she says, “but I wanted to be like my brother.

By 5, Kendall started to play house league hockey. Because there was no girls league in her area — let alone even female players — Kendall played with boys and did just fine. But her parents shielded her from dismissive comments and actions from the adults and kids around her.

Then, when she was 7 years old, Kendall’s eyes were opened to new possibilities. She attended the hockey camp of Cammi Granato, the captain of the 1998 U.S. women’s hockey team that won the Olympic gold medal.

Kendall remembers Cammi pulling the medal out of her backpack and handing it to her. Upon leaving the empowering camp, Kendall decided she would follow in Cammi’s footsteps.

I want to go to the Olympics,’ ” she recalls telling her parents. “I didn’t even know what the Olympics were, but that’s where Cammi went, and that was the pinnacle of hockey.

For female hockey players, at that time. Boys, on the other hand, dreamed of the Olympics and starring in the NHL, where they could make lots of money and win the Stanley Cup.

And those distinctly different paths were always thrown in Kendall’s face in those formative years. She longed to play travel hockey, and she kept trying out for the same team… and always getting cut. She, once again, wanted to follow in her brother’s footsteps.

Later, she would learn that the coach had told her parents that he believed Kendall’s presence on his team — comprised of boys — would “cause problems.”

Her parents found another team for Kendall to try out for, and she finally made the cut.

My parents thanked the coach because no one wanted me,” Kendall says. “But that coach told my parents that I was the first pick!

Ryan Hartman, currently a Minnesota Wild winger, was a childhood teammate of Kendall’s. He insisted in the documentary that Kendall brought a lot to their team.

“I think having her (on the team) really opened everyone’s eyes,” Hartman says in the Blackhawks’ documentary. “She pushed the pace. Sometimes, kids don’t want to be out there, and she’d come out and embarrass people. Made everyone work harder. She’s brought that everywhere she goes.”

But by middle school, the boys were growing faster and getting stronger at clips far more accelerated than Kendall, who is 5 foot 2, 125 pounds.

By 13, for the first time, she started playing hockey with girls. By 15, she was invited to her first U.S. National team camp. 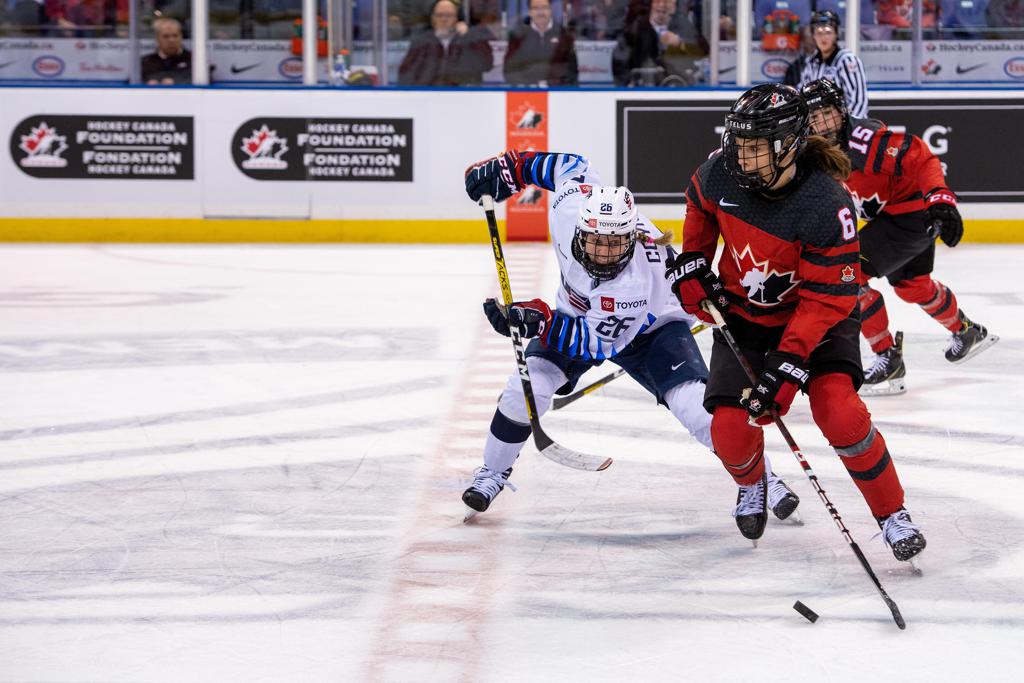 “When I put on a pair of skates at 3, I could have never imagined the life that I'm currently living,” Coyne says. “But there are so many pioneers and legends who have blazed a path for a player like me. I’ve been able to benefit from so much by simply loving this game and following my passion.

It’s led me to one of my main goals, which is to leave this game better than I entered it.

She’s grateful to have played at — and graduated with multiple degrees from — Northeastern University. She’s traveled the world. And she’s experienced so many incredible opportunities.

“I want to make it better for the next wave of girls,” she says.

Cammi proudly says in the documentary that Kendall did just that with her amazing performance at the 2019 NHL All-Star festivities.

“She broke a barrier that I don’t think anyone could foresee,” Granato says. “It’s epic… It was more than just a race. It was so much bigger than that for women’s hockey.”

So Kendall welcomes any chance she gets to cultivate her craft, as a player, commentator and trailblazer. She’s training for the 2022 Beijing Winter Olympics, and she’s supporting her husband Michael Schofield, an offensive lineman in the NFL.

There’s nothing traditional about her journey, but Kendall wants to impart what she’s learned along the way.

“You have to have a burning passion for the game if you really want to get better at it,” she says. “That’s brought me to the level I’m at today. I see over 100 girls at my camp, and many of them are bigger than me. But you don’t have to be big to dream big. Those obstacles become a part of your journey, and it’s what makes the top so special.”