PLAYERS COME Practice with us

We are offering U12s the opportunity to skate with PTL coaches and players on Mondays during the power skating and skills sessions.
GIRLS MUST BE REGISTERED WITH USA HOCKEY

Email PTLGIHC@gmail.com to be added to our team news letter. 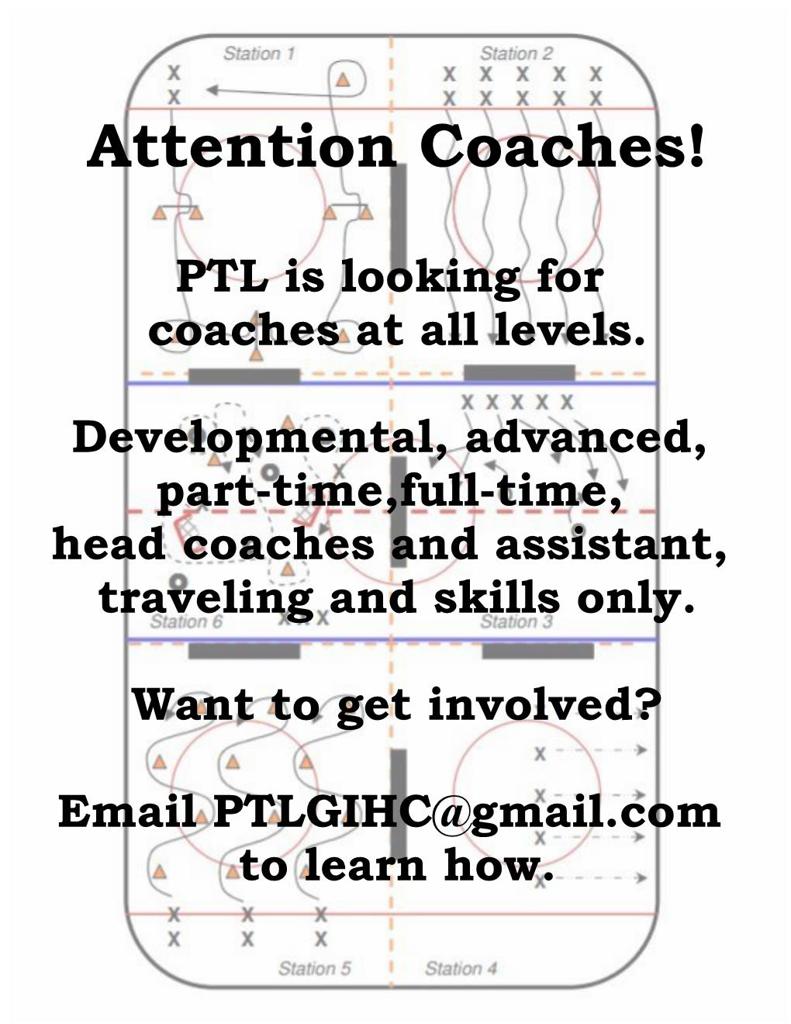 U12 is looking for a few good girls!

Why join an all girls' travel team?

Many boys' coaches start to ignore or don't know how to coach girls on their rosters after the squirt level.  Coaches may by-pass girls because many girls choose not to play once checking is introduced at bantam age and the physical size difference becomes a deterrent for many girls.  Boys' coaches might stop putting time and effort into the girls, who they feel will eventually leave the sport or join girl's team.  That is where a girls specific program, like PTL, comes into focus.

Travel is essential for players and teams to compete against other teams throughout the region.  Playing on a young girls' travel team prepares young players, so they can attain the skills needed to compete at the district, national, and collegiate levels in women's hockey.  Being part of a girls' team that grows together, strengthens individual development and fosters team unity and becomes a major reason for choosing a proven program like the Princeton Tiger Lilies.

Girls' travel hockey is a serious sport that has solid collegiate alternatives for the driven female athlete and may open multiple opportunities.

Starting early on a girls' team has many advantages towards preparing for the higher levels of play.  It is also a sport that can be played throughout her life.  It doesn't end after high school or college.

PTL is committed to developing girls into dynamic hockey players from U12 through U19 and expanding into the younger ages through a new partnership with Ice Land.  Our coaches run ADM type hockey drills, while focusing on improving the skating, stick handling, offensive and defensive skills of all their players.  Our coaches teach girls proven plays, strategies and concepts that broaden the player's hockey knowledge and ability to see the ice and play better with their teammates which make our teams successful in the sport of girls' hockey.

Princeton Tiger Lilies do not over promise and under deliver, we strive to provide the best coaching and level of play for all our girls.

Our success is measured in the number of PTL alumni that play at the collegiate levels, on athletic scholarships and ultimately in the NWHL.

Is girls' hockey as good as boys' hockey?

Absolutely!  MAWHA (Mid-Atlantic Women's Hockey Association) follows all USA Hockey rules governing women's hockey, including timed periods, set rosters, league play, play-offs, and USA Hockey officiating. Between league games, non-league games and tournaments, the schedule is full of games against many worthy opponents.  Hockey teams from all over the US and Canada invite PTL to their tournaments and schedule games against us. Some of these girls' hockey teams are professionally sponsored hockey teams!

As you watch the girls skate and stick handle, you realize that they are tough athletes who understand the game and play just as physical as the boys, but without the full checking.  They practice hard and play harder.  "Play like a girl" has become an inspiring slogan throughout girls' and women's hockey at all levels.

What are some other advantages to playing on a girls' team?

Girls play with and against other girls exclusively.  Teams that form and play with each other at the earliest ages develop bonds and relationships that last many years.  Many of our alumni are still friends long after their hockey club careers have ended.  Players that work together, travel together and play together for years become stronger with every game and every level they progress through.  Families also develop close relationships, especially while on the road and share memories that last a lifetime.

Awkwardness ends on a girls' team.  Girls don't have to separate themselves from their teammates to find somewhere to get dressed for a game.  This give them a feeling of inclusiveness not easily realized on a coed team.

Players learn respect for each other, coaches, officials, and themselves. Hard work and self discipline is expected.  She becomes a self confident athlete who is a team player.  These are life skills to be developed and fostered.

What organizations have these girls come from?

Most PTL girls have started on various NJ and PA house leagues, coed travel teams, and school teams.  Many started playing hockey because their brothers play.  Some of our older girls are playing on their school teams, including Hunterdon Central Regional High School, Princeton Day School, Princeton HS and Brick HS, Mater Dei and the Hun School.

PTL is committed to helping develop all players and will be working closely with our rink to develop and train young players, including boys, toward the ultimate goal of tier 1 hockey right in central New Jersey.